Epic migration to the Cordon Rouge

An epic annual migration from Africa drew to a close when a family of swallows settled to nest close to our boat yard.  Each year they perch on top of one of our trip boats – The Cordon Rouge – where they feed their young fledglings.

The swallows arrived a little later than in previous years – so we were relieved to welcome them home.  The adult birds now have a lovely brood and have been brining small insects to the juveniles as they sit patiently on the Rouge’s mast lights. 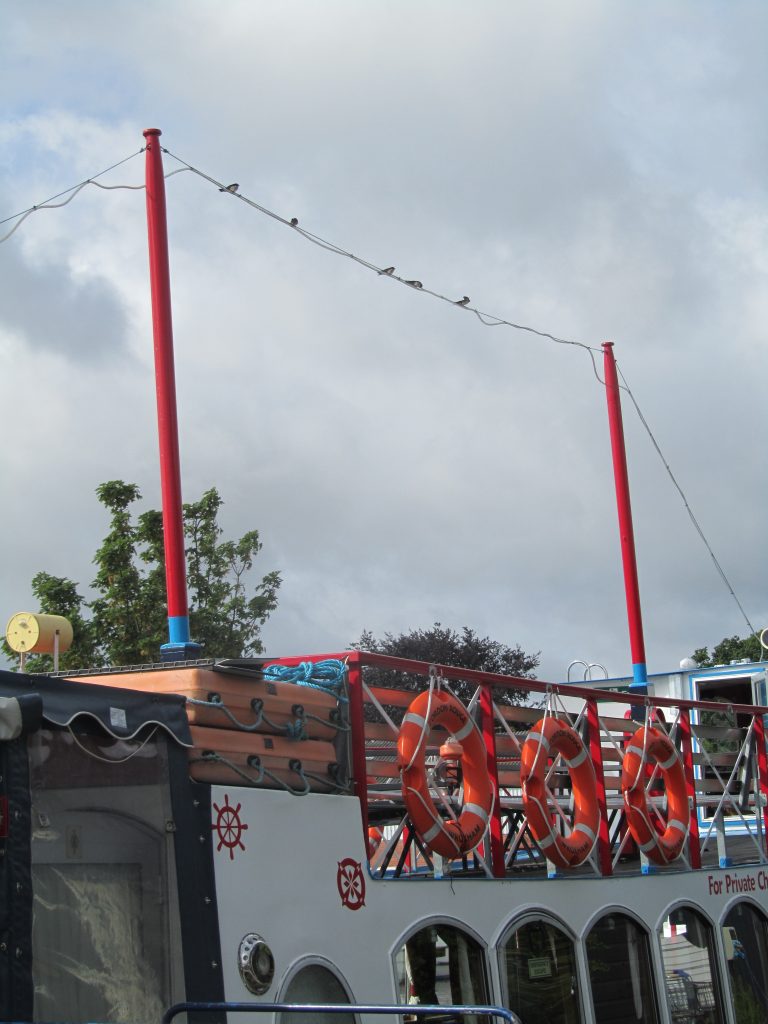 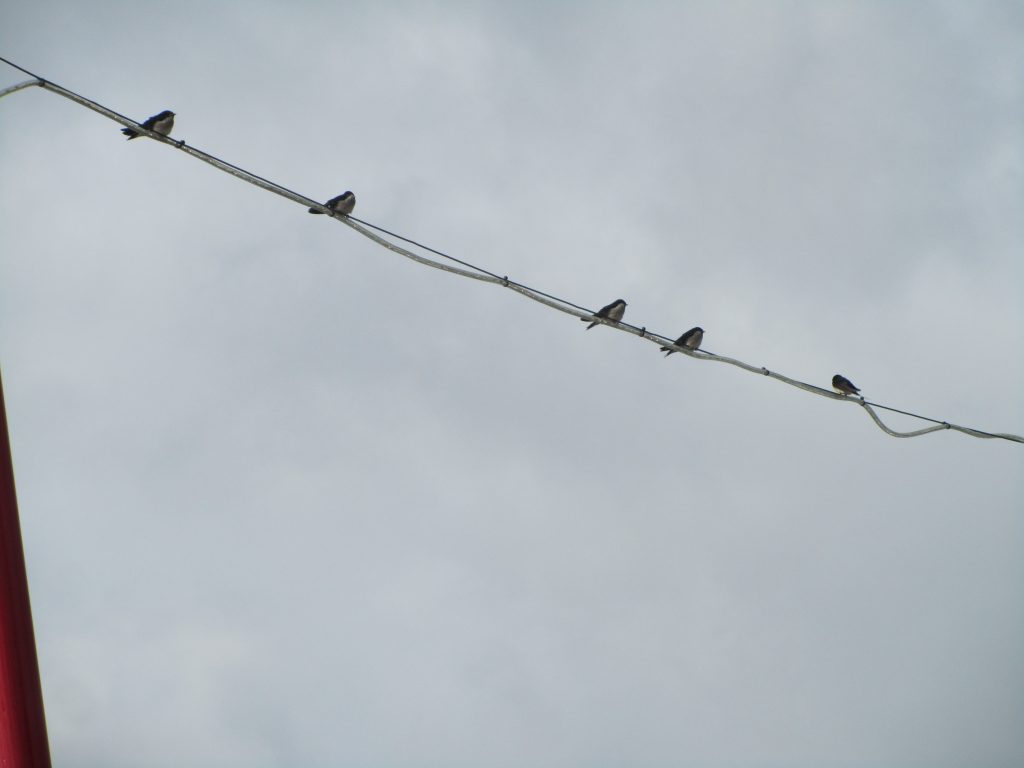 Another beautiful, fast flying bird – The Kingfisher – has been occasionally spotted by one of our skippers, Richard on the river around Salhouse Broad.  This is good news as these electric blue birds seem to be showing up a little less often than in previous years.

One of our trip boat skippers, Oli and his passengers had a fantastic site of an otter when it swam across the entrance of Wroxham Broad as they turned into the broad.  Otters were once highly endangered on the Broads but are now making a real comeback, with their territories spreading all over the Broads.  We even have anotter hunting in our boat basin in the middle of Wroxham.

One of the benefits of otters being highly territorial is that they drive out mink.  These species were released from fur farms by animal rights activists and cause real environmental damage.  Although there have been many attempts to reduce their numbers over the years through trapping this has only had limited success – but the otters seem to be doing a far more effective job.

Despite all this one of our skippers, Tom, saw a mink on a boat trips on Woodbastwick reach and skipper Oli also spotted them in Wroxham village.

A new swan family with just one, very cute cygnet has been seen for the first time on the river around Salhouse Little Broad.  It’s much smaller and fluffier than the cygnets in our other swan families, which were born earlier in the year and are all doing well, with the older ones gaining more independence and exploring further, leaving their parents behind on occasions. 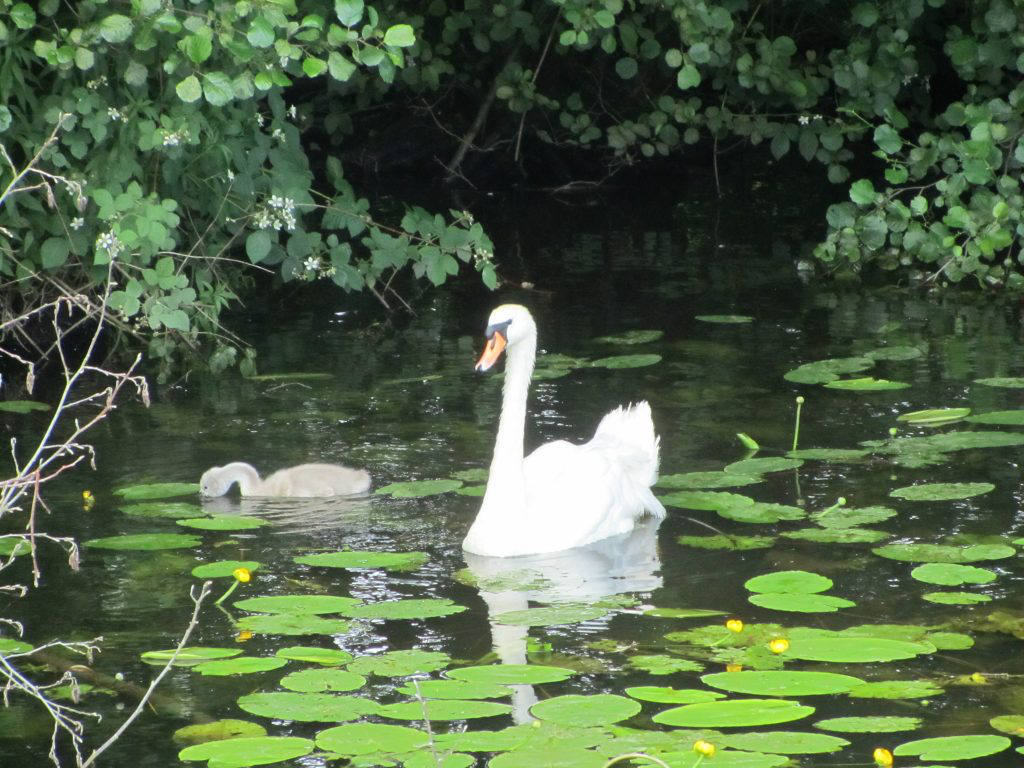 We believe that the single cygnet hatched around two weeks ago on Salhouse Little Broad (a private, secluded broad that is closed off from navigation) and is now venturing out onto the river for the first time.

Our family of Coots that we reported hatched a few weeks ago on Salhouse Broad are also starting to grow up and venture further afield, across the broad and even onto the river. 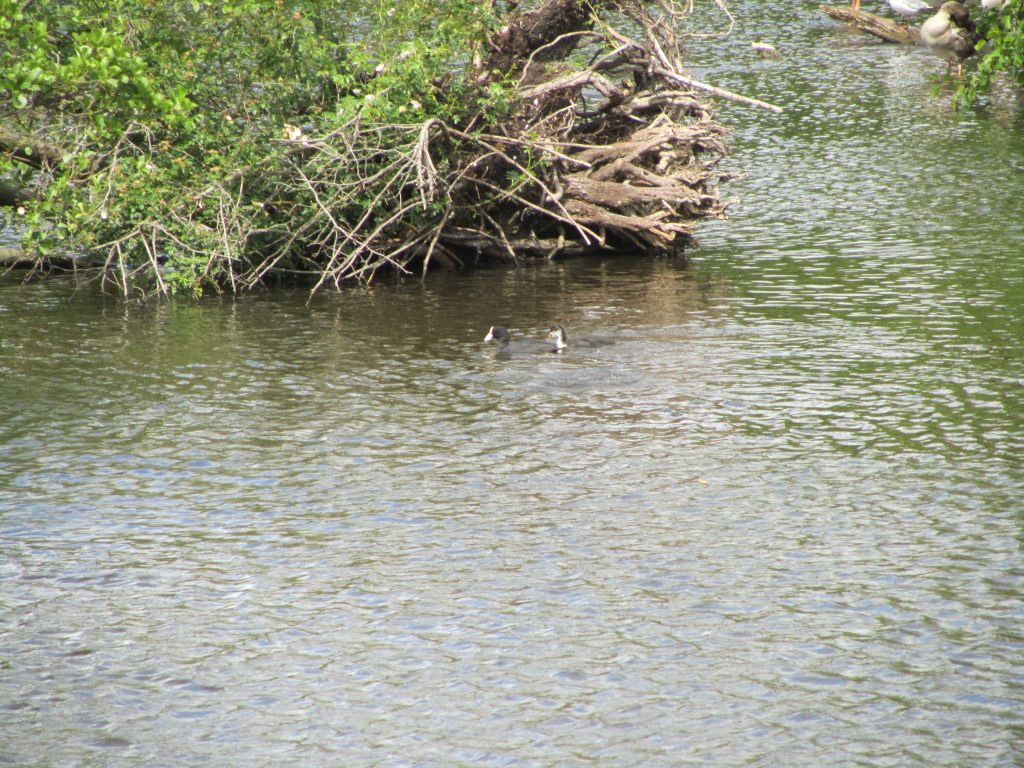 One of the pluckiest little Mallard ducklings we have seen was on Malthouse Broad. 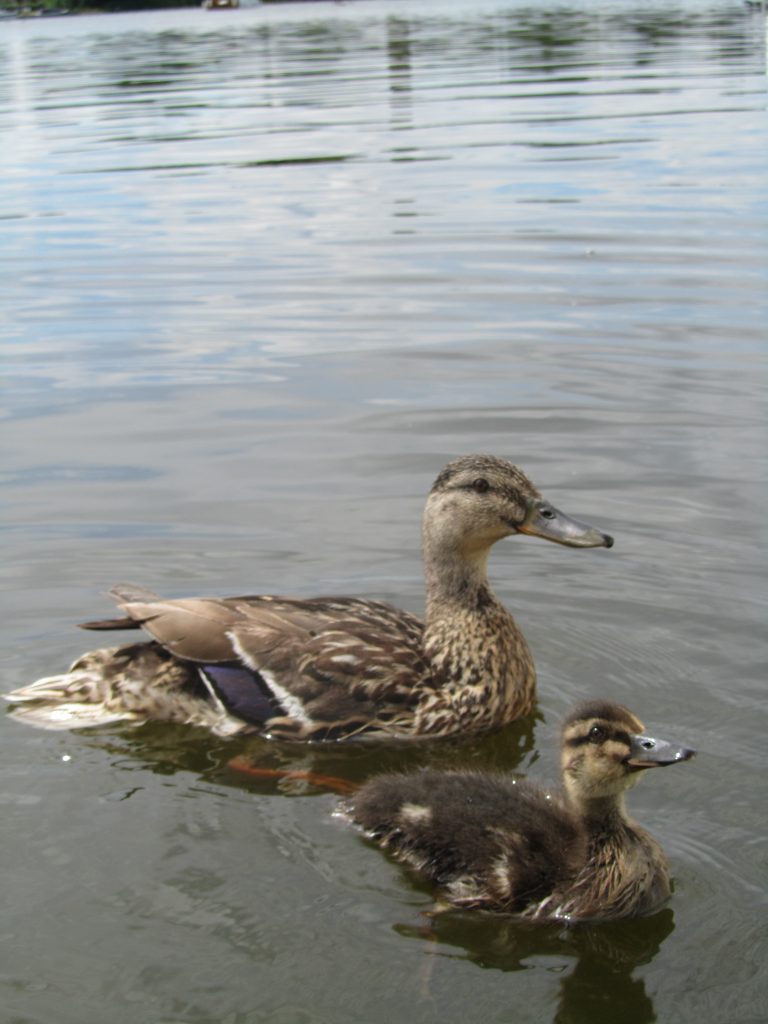 While being fed by tourists the duckling’s mother kept trying to steal the food first!  Undeterred by such bad parenting the duckling kept beating the mother duck to the food.  A large Drake (male duck) then moved in for the food and despite the massive size difference the brave, little duckling took up  the mother’s duty and chased off the big Drake!

We are regularly spotting a controversial bird – The Cormorant – fishing on both Wroxham and Salhouse Broad. The Cormorant is coastline bird, which is coming inland as the fish in the North Sea become depleted, and fishing is easier in the calmer inland waterways.  Popular with some as a protected species, they are not as popular with fisherman as they are greedy birds and tend to eat more than their fill of fish! 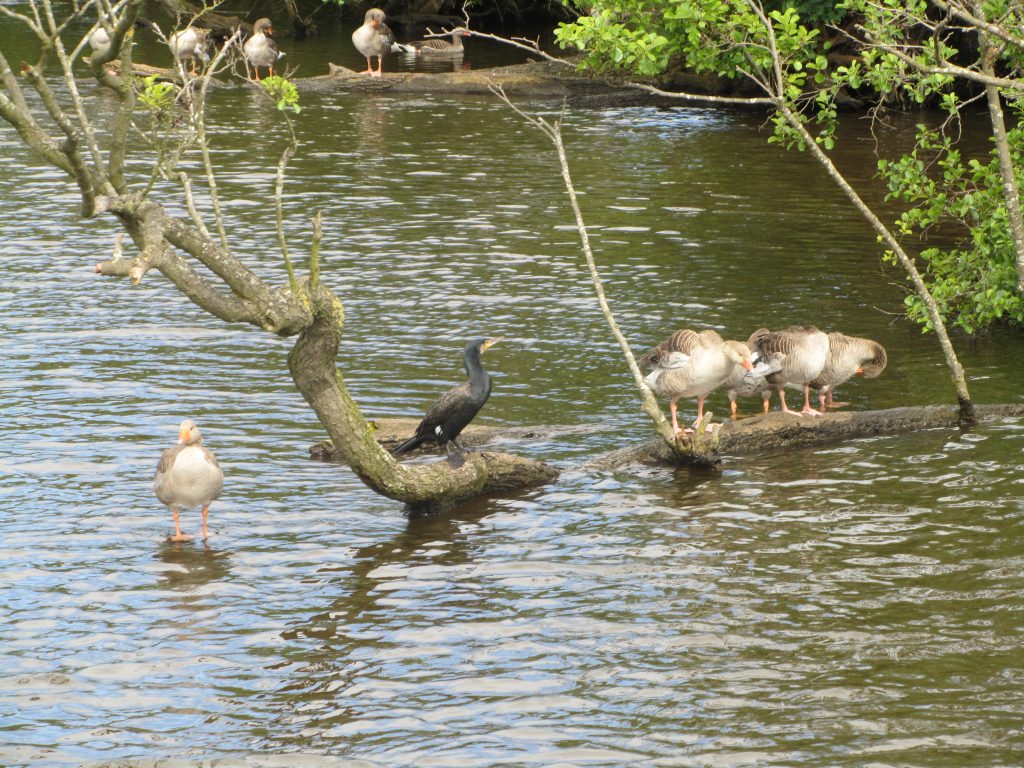 On Hoveton Great Broad – a beautiful, remote nature reserve that can only be visited by stopping at some special moorings near Salhouse and is entirely cut off by road –  we have spotted two very special insects – The Norfolk Hawker Dragonfly and  Swallowtail butterfly. 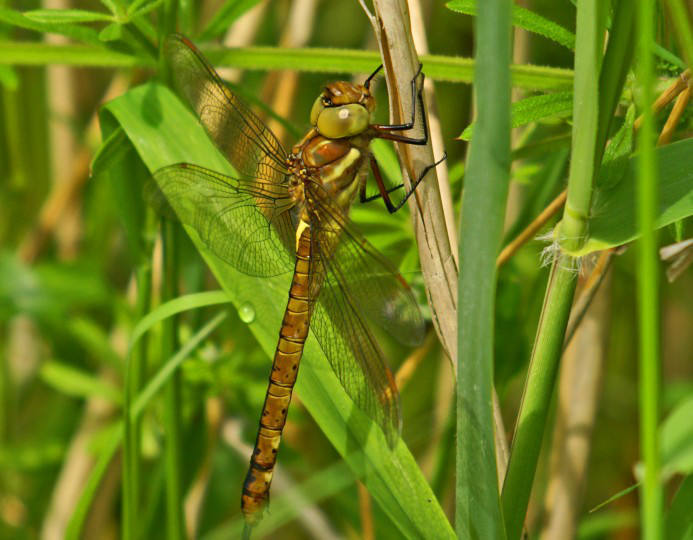 The Norfolk Hawker dragonfly is a very rare and imposing species, with clear wings, green eyes and characteristic yellow triangle shape on the dragonfly’s body.  As the name suggests Norfolk is this large dragonfly’s stronghold and a species we are very proud of.

The Swallowtail butterfly is Britain’s largest butterfly – with a wingspan of up to 90mm and a distinctive forked tail like a swallow.  These beautiful creatures are only found on the Broads because their caterpillars will only eat a plant called milk parsley that can only grow in our reed beds!

We will finish the blog with a couple of cute close up shots of a Greylag gosling and Egyptian gosling taken by Oli at Malthouse Broad. 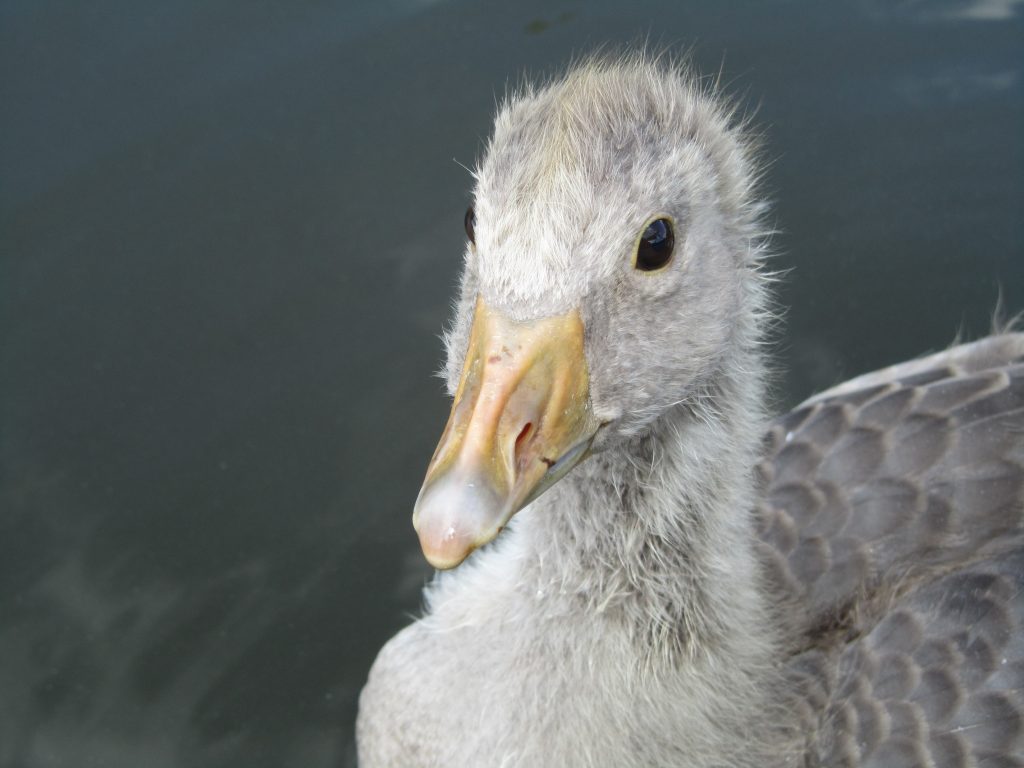 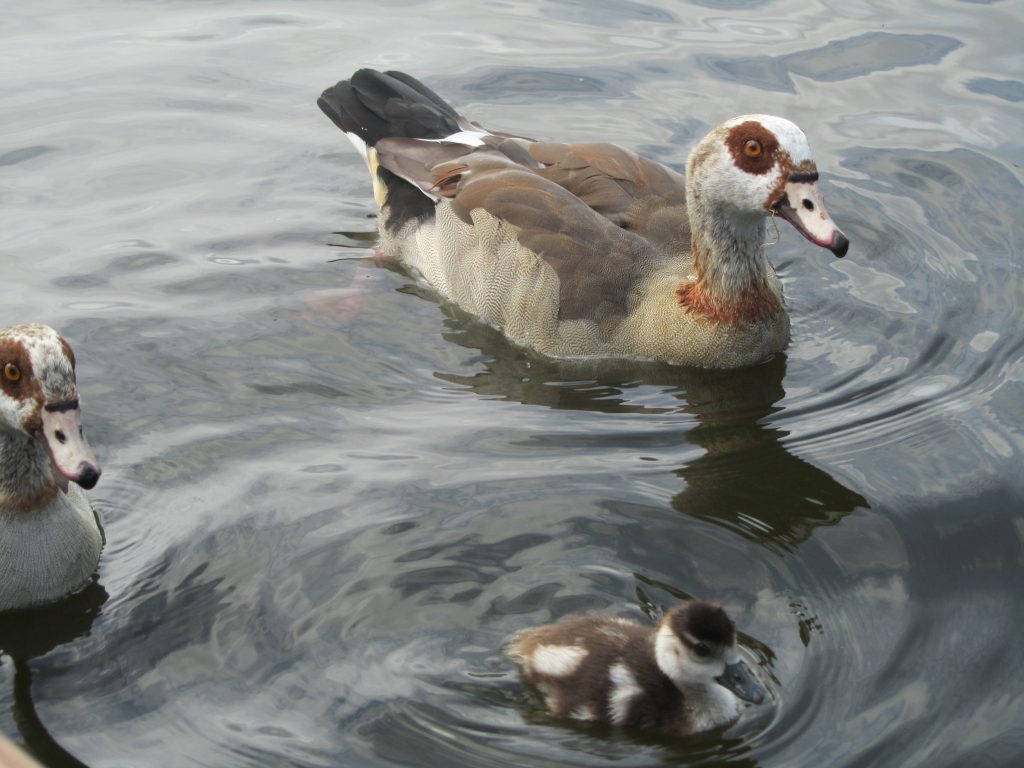 Share your photos
If you have taken any wildlife pictures on holiday with us we would love to share them on this blog.  Simply send them to info@broads.co.uk or via Twitter @NBDWroxham or Facebook by searching Norfolk Broads Direct or Instagram norfolk_broads_direct