One of the highlights of a holiday with Norfolk Broads Direct is trying to spot our National Park’s wonderful wildlife – in fact more than a quarter of all of Britain’s rarest species live here.

Of course just because the wildlife is here doesn’t mean that it will reveal itself to you but 2017 turned out to be a magical year for wildlife watching.  In this special nature blog we look back on our top 10 favourite wildlife encounters of last year.  Let’s hope this season is even better!

Otters are perhaps the most captivating characters on the Broads.  Graceful, yet enigmatic, they are the species that everyone hopes to spot on their Broads boating holiday.  And the great news is that after years of persecution we are seeing more otters than ever before – with our customers having enjoyed dozens of encounters with them in 2017.

Some of our favourite sightings include watching otter families playing together in Wroxham village, being fortunate enough to have an otter swim alongside one of our river trip passenger boats for some distance as we travelled along the river Bure and, on another occasion, following an otter right across Wroxham Broad – giving a privileged glimpse into their secretive world.

Plenty of otters came to us in 2017 too by putting in lots of surprise appearances in our boatyard, including running across our car park and on another occasion startling one of our members of staff by popping up just under his small dingy.  Otters also spent the night in the warmth of our boatsheds last winter and left their tell-tell spraint on mooring ropes to mark their territory (yuk)!

This is our favourite otter picture of the year taken by David Seaford while out on the river near Wroxham Broad. 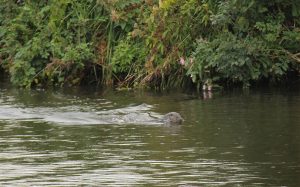 Many people’s holidays were given an extra spark of excitement when an eclectic blue Kingfisher suddenly flashed past.  Usually the experience of seeing a Kingfisher fly fast and low over the water only lasts a second as these secretive birds usually disappear almost as suddenly as they emerge.
But for a few weeks in the summer two juvenile kingfishers were far less shy and we managed to quietly bring our boats up to their favourite perch, a fallen branch near the entrance to Salhouse Broad, and watch them for some time without them flying away.  It was a wonderful experience but as the birds grew up they were pushed out of this territory by their parents and are now probably just as shy as the other adults. 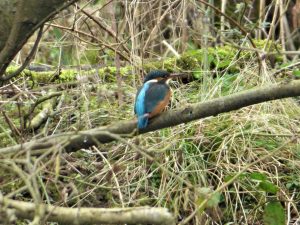 We were delighted to see Swallowtail butterflies – the stuff of Norfolk Legend – on Woodbastwick reach and while taking Ashley Primary School students around Hoveton Great Broad this summer.  By far Britain’s biggest butterfly, with a swallow like forked tail, Swallowtail butterflies only live on the Broads and nowhere else in the country because their caterpillars can only eat a plant called Milk Parsley which will only grow in our National Park.

Despite being such a famous jewel in Norfolk’s crown you have to be extremely lucky to see a Swallowtail because the weather conditions need to be perfect for them to emerge.  That made our sightings all the more special, particularly with Ashely Primary School when a Swallowtail butterfly landed on one of the children’s brightly coloured hats!  Their teaching assistant, Megan Sayer, even managed to take this sensational picture of the butterfly. 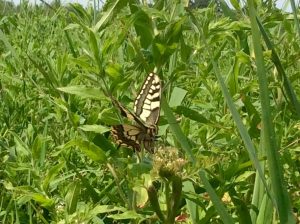 We were really excited to spot a Bittern on several occasions over a period of about a week this summer both in flight and resting in the reed beds on Woodbastwick reach.  The large brown bird, which is related to a heron, is one of the most iconic creatures on the Broads, since our reed bed habitat provides a stronghold for this very rare and endangered species.

Despite often being heard making their characteristic booming sound from the reed beds during the breeding season Bitterns are very rarely spotted due to their superb camouflage and retiring nature.  So for us to see the Bittern on a busy section of river in the height of summer and in the middle of the day was truly remarkable.  It must have been a particularly brave bird!

The majestic sight of Marsh Harriers gliding past has been another highlight of 2017. The largest of the harrier family, Marsh Harriers were once almost extinct, having been reduced to their last pair in the whole of Britain in 1971.  After a lot of hard work from conservationists and having been given strict protection Marsh Harriers have made a fantastic comeback on the Broads.  Although they are now a regular sight, seeing these birds gracefully hunting above the marshes has been one of the great pleasures of heading out on the river this year. 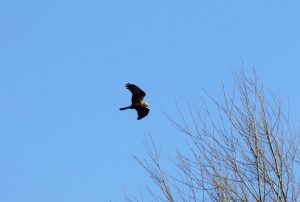 We loved watching at least five pairs of Great Crested Grebes perform their magical breeding rituals in Salhouse Broad this spring as well many on other places on the Broads.  As the birds (which are related to the Penguin) have their feet right on the back of their body they can never come to land so they exhibit some really captivating behaviour.

From mid February onwards we watched the Great Crested Grebe’s magical “mirror dance” in order to affirm their bonds with a mate.  Watching the males and females face each other and instantaneously copy one anothers intricate movements as if looking in a mirror really was a special experience. 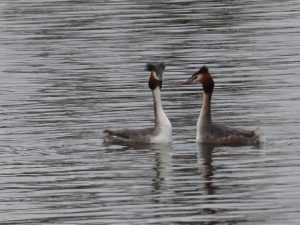 Once the male and females paired up we spent around a month watching them build floating nests along the water’s edge to lay their eggs on.  On one small area of Salhouse Broad, which we affectionately named ‘Grebe Bay’, there were four birds nesting in one small area!

The nests started off small but during the month long gestation period, for which the females remained on the nest the whole time.  But the males worked really hard adding to the nest with everything from reeds to lilies and one even chose a gold chocolate wrapper for decoration.  The males were also extra busy catching fish to feed both themselves and their partner. 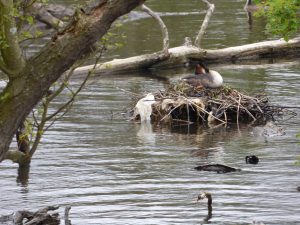 When the eggs finally hatched  we loved watching the  Great Crested Grebes carry their little ‘Greblets’ around on their backs because they were two small and vulnerable to go straight into the water.  The ‘Greblets’ looked adorable with their little black and white stripy faces and most of them grew up to be big, strong adults! 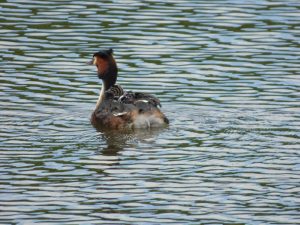 Swans are probably the most common bird you will see on the Broads but they are still a beautiful sight.  One of our favourite moments of 2017 is captured by this photo of two amorous swans preparing for the breeding season. 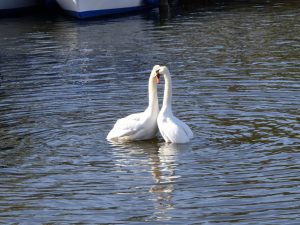 This year there were three families of swans bringing up their adorable cygnets in Wroxham village.  All the cygnets did well and it was wonderful to watch them grow up through the year.  But the cutest moment has to be watching the cygnets ride on their Mum’s back! 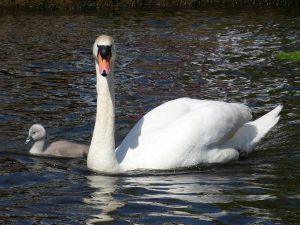 Herons might appear a bit grumpy but we’re sure they are getting cleverer.  A few years ago one or two herons realized that if they tapped their beaks on the backdoor of our riverside holiday homes someone might throw them a treat.

This season they seem to have taken this a step further and worked out that hanging around fisherman is less effort than catching their own fish.  Throughout the year more and more herons seem to be standing patiently on the bank or even the roof of boats by anglers waiting to be thrown a fish! 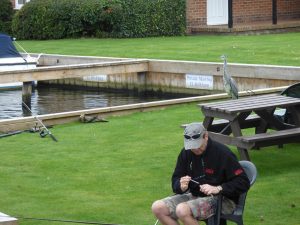 In April this female Bufflehead duck appeared for a few days in Wroxham village and caused quite a stir.  We contacted the RSPB who explained that Buffleheads usually live in Woodpecker holes in North America but this one was more likely to have escaped from a private collection! 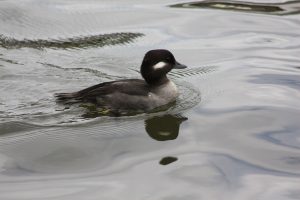 We also had two surprise visits from Mandarin ducks, with one appearing for a few days in Wroxham village in the summer and another duck showing up briefly in the autumn before seemingly vanishing. The amazingly colourful ducks were originally introduced as ornamental birds from China but the RSPB estimates that there are now 2,300 breeding pairs in Southern and Eastern England having originally escaped captivity.  Despite these numbers the Mandarin ducks still gave us a surprise! 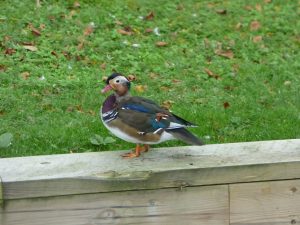 We are really looking forward to seeing what nature brings this year and hope you will join us on the water soon!